Four weeks of blueberry harvesting remain at Wiserow Enterprises in Marondera, southeast of Harare in Mashonaland East, Zimbabwe, where the first rains of the season fell this week.

“Half of our blueberry crop is grown for Costa’s African Blue programme while the balance are open varieties that are marketed through the Zambezi Blue brand,” says Bruce Meikle, general manager.

Ideal soil for blueberries
The first berries were planted in 2017, initially with an equal hectarage of raspberries and blueberries. Raspberry export prices could not compete with Moroccan produce due to their proximity to European markets and lower freight costs, so the area was converted to blueberries.

“We’ve learned a lot over the last four years, for instance that blueberries can be grown successfully in open land. Currently 90% of our berries are potted in substrate but a 2.5ha trial planting in the soil has shown good results, so going forward we will plant more in the soil,” Bruce says.

Marondera has sandy loam soils, locally known as ‘tobacco soils’, which are ideal for blueberries.

Around 40% or 15ha of the berries are under plastic with the balance planted in open fields. The farm avoided the widespread frost damage that affected projects elsewhere in Zimbabwe two months ago.

“We are situated on top of the ridge with the blueberries planted down the slope to drain away the cold air and minimize frost damage.”

“Our location on the crest of the watershed offers the additional benefit of good water quality since there are few water users upstream,” he explains.

Zambezi Blue
Wiserow’s early season blueberries are sold to South Africa, whose season starts later due to its higher latitude.

As the season progresses, they export to the same international markets as their southern neighbour, namely the Far East, Middle East and Europe.

Together with four other Zimbabwean growers, Wiserow Enterprises formed the Zambezi Blue export brand to consolidate volumes for critical mass and reliability of extended supply.

Defined by a collective determination to share information and technical expertise, the grower group has enjoyed the collaboration and values the support of  agronomy consultants, freight forwarders and clients.

Wiserow hopes to produce about 380 tonnes in 2021 and once the plants reach maturity the yield should increase to 800 or 900 tonnes a year. The combined volume of Zambezi Blue is likely to reach 1,500 tonnes per annum when the group’s plantations achieve full capacity.

“Increased awareness of blueberries’ health benefits has increased the interest level from all markets and we hope that re-opening of the tourism sector will boost domestic consumption,” says Kath Gau, marketing and logistics coordinator of Zambezi Blue. 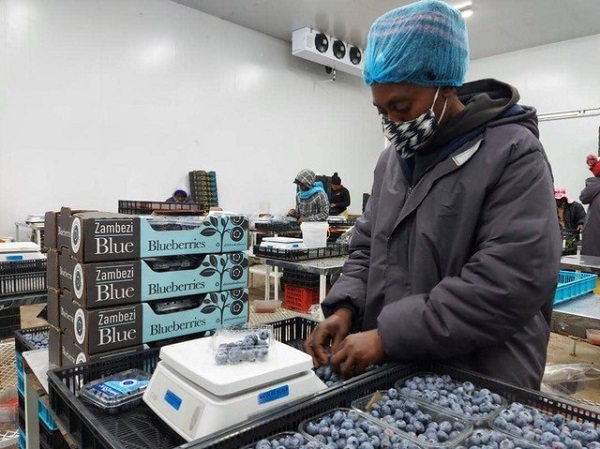 Increased competition in the blueberry market
“Competition from Peru and South Africa has increased over the last three years and prices have dropped,” Bruce continues.

However, he remarks, clients and consultants have observed that their cool night temperatures enhance the taste of Zimbabwean berries, when compared to blueberry production regions elsewhere in the Southern Hemisphere.

Zimbabwe’s landlocked location requires that most sea freight exports depart out of Cape Town, although two containers were despatched via Durban to the Far East this year.

Air freight leaves from Harare and Johannesburg, but air freight has been limited due to travel constraints and is increasingly expensive, Bruce notes.

Peas and blueberries neatly synchronise
Originally Wiserow envisaged 80ha of blueberries, Bruce says. “We currently have 43ha in production and may expand slightly in the future.”

The main limiting factor to expansion is human resources during the harvest period. Availability of seasonal labour is less reliable following good rains which keep subsistence farmers busy in their own maize (corn) fields.

Wiserow strives to maintain a consistent labour force through fine-tuning the timing of their pea season.

“We plant 30ha of sugar snap and mangetout peas and the sowing period has been brought forward to week 12. This provides a better opportunity to consistently utilise our packhouse and labour resources through week 18 to 32 whilst peas are harvested prior to the blueberry season.”

Wiserow Enterprises is 50% owned by Harare-based PHI Commodities, a marketing and logistics company which produces and trades cereals and grains, agricultural inputs and horticultural products like potato seed, passionfruit, peas, beans and blueberries.