Africa contributes about one-third of the global banana production. The Great Lakes region of Africa (GLA), including Kenya, Uganda, Tanzania, Rwanda, Burundi, and the Eastern region of the Democratic Republic of Congo (DRC), is the largest banana-growing and consuming area with the most significant consumption at 220-460 kg per person annually.

It provides 30%–60% of the daily per capita calorie intake in these countries.

Bananas are considered primary energy sources for millions of people in East Africa. About 55% of the total cultivated area for bananas across Africa is in the GLA region(FAOSTAT, 2019).

Apart from a staple food, banana also provides income for the smallholder farmers according to a report on www.openaccessgovernment.org

Bananas are indigenous to tropical Indomalaya and Australia. Hundreds of varieties of bananas are cultivated and consumed globally.

However, the Cavendish type of dessert banana is grown mainly by large-scale farmers for local and international markets.

Additional dessert varieties such as Gros Michel, Sukali Ndiizi, Silk , Pome and Mysore are also grown on a small scale.

In Africa, the banana is one of the main crops used for staple food and income. In the GLA, the emphasis on improving food should be on banana rather than cereal crops.

The genetic improvement of bananas extends excellent prospects for enhancing food security as it supports more people per unit area of production than other staple crops.

Since banana is a vegetatively propagated crop, its production is affected due to the build-up of several pests and pathogens, particularly where several co-exist. 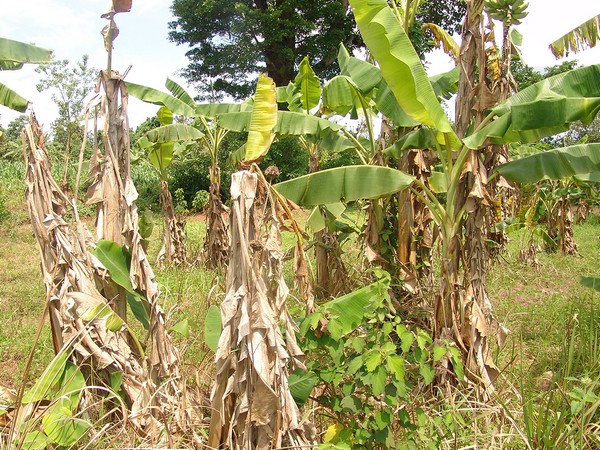 Impact of banana Xanthomonas wilt (BXW) on crop production
BXW, caused by Xanthomonas campestris pv. musacearum, is considered one of the most devastating limitations for the production of bananas in the GLA region of East Africa.

The disease affects all cultivated varieties of bananas and its impact is huge and rapid. It has destroyed whole plantations in many of the affected areas .

Overall, economic losses from BXW were estimated at $2 to $8 billion over a decade.

BXW disease has affected the food security and income of smallholder farmers, who depend on the banana for their livelihood.

Developing resistance to BXW disease
The use of disease-resistant varieties for many plants has been a productive and economically viable strategy for managing diseases.

Yet, no source of resistance has been found against BXW in any cultivated banana varieties; only the wild-type diploid banana progenitor “Musa balbisiana” exhibits resistance to this pathogen.