Many farmers wonder about the difference in productivity between growing crops rooted in soil and soilless cultivation. To date, there is still a certain confusion among the two cultivation techniques.

While the traditional method is based on production exclusively in the natural soil, soilless cultivation does not rely on the agronomic conditions of the soil, allowing growers to choose the most appropriate substrate to maximize production and thus offering significant advantages to farmers.

In order to clarify these aspects, we interviewed Projar, one of the pioneering companies in this field, which has numerous international years of experience and is distributed in Italy by Agrochimica.

We interviewed Álvaro Villalba, Projar’s expert in above ground cultivation. “Soilless crops offer much higher yields. Production increases up to 50% in the first year.

This means that, although soilless production requires a higher initial investment, the return on that investment is quicker and easier.”

As a demonstration of this short-term profitability, we’ll look at the specific case of a company in Peru, whose entire project was developed by Projar, which started a soilless production of blueberries from scratch.

“We have been contacted because the traditional production could not compete with an industrialized one but, at the same time, the owner was wary of making such an important and strategic change for the future of his company.”

For this reason, a part of the company was allocated to conventional soil-based production and another part to above ground cultivation.

By doing so, both productivity and economic results were made comparable, allowing for an informed choice on which method to use in the future.

The initial costs of production were the following: 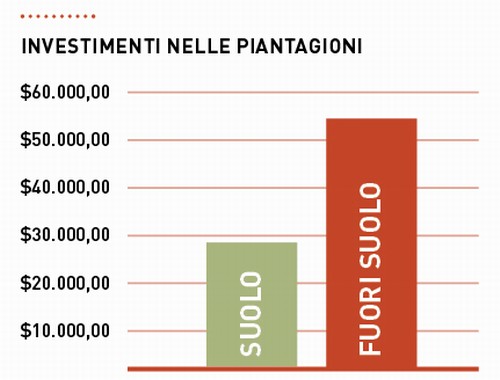 However, one must point out that 100% of these costs are covered by the producer, from the preparation of the soil, to the purchase of berry plants to labour.

Therefore, the value of the plants in the overall costs was almost twice as high.

Once both growing methods were implemented, production began simultaneously. At the time of the harvest, the income per hectare in the first 3 years was as shown below: 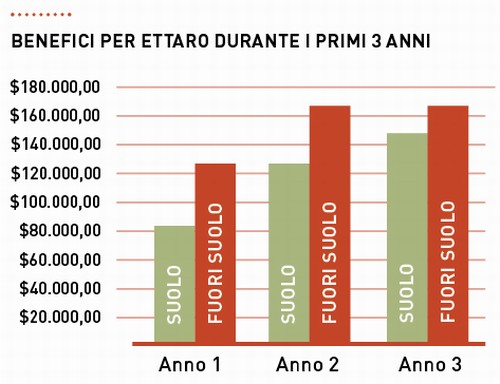 The benefits were measured by valuing the production obtained with the seasonal prices of the same imported products.

As shown in the chart, the income of the soilless plantation in the first year was 50% higher than that of the in-soil plantation.

Why does above ground provide excellent economic results in the first few years?

“Substrate is a more comfortable growing space than the soil. First of all, the time of transplanting is stress-free because the substrate provides an environment very similar to the one that housed the plant in the nursery. This ensures that the plant starts its growth in an optimal way. Moreover, the roots will develop much stronger and faster in a container,” continued Villalba.

This early root development, accompanied by a higher planting density, means that the harvest is much more abundant in those early years.

As time goes on, yields even out because the plants will reach their full development in the ground as well, albeit more slowly.

However, there is still an important overall economic advantage that is more evident in the first years, a period in which harvests are very important in order to more quickly cover the expenses just incurred.

Projar provides a practical training guide on the above-ground model that can be downloaded for free from this link: bit.ly/3eHxEZd

In addition, Agrochimica’s technicians offer their specialized advice on this type of solution throughout Italy and can be contacted by visiting www.agrochimica.it.

One thought on “How profitable is above ground cultivation? A personal experience by agronomist”